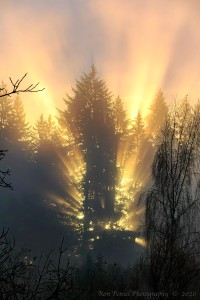 The wrapping paper I bought for Christmas three years ago left traces I’m still cleaning up. It was dazzling paper, red with lots of glitter, and it made a beautiful package. It also left glitter everywhere, sparkling crimson flecks I’m not sure will ever go away completely, to remind me of that dazzling Christmas package.

“Dazzling.” That’s the meaning of the Greek word used to describe Jesus’ garments when he was transfigured before his disciples (Mark 9:2-9) – “his clothes became dazzling white” is the way Mark describes them, like sunlight glistening on water. But the passage isn’t about Jesus’ clothes; it’s about Jesus and what happened before the eyes of those two witnesses, and about something more.

Words are too poor to adequately describe what happened on the mountain that day. Was it an objective physical transformation of Jesus? Was it a subjective experience of the disciples that left them seeing Jesus differently? Was it tradition’s way of creating a story to tell of something that could never be truly described in words? No one can say with certainty. But I think those two disciples were led to an exceptionally thin place in the curtain between earth and heaven to witness a defining moment in the arc of Jesus’ life.

“Thin place” is a term rooted in Celtic spirituality, and it refers to a place or an experience where the boundary between earth and heaven becomes almost transparent; where we can sense the divine more readily; where the distinction between sacred and profane blurs or disappears entirely; and where, to borrow from poet William Blake, the doors of perception are cleansed and everything can be seen as it is, Infinite.

Most early Christians began to share Matthew’s expectation, shared by many Christians today, that the risen Jesus would be with them “to the end of the age” (Matt. 28:20), when God would break into history and dramatically transform creation. Or they anticipated heaven as a realm awaiting them after their physical death. It’s a view held by Latin theology, represented in the Western world mainly by the Roman church and picked up after the Reformation by much of the Protestant church. We follow the rules or keep the faith in this life so we can earn a place in the life to come, in heaven. And if we don’t follow the rules or keep the faith now, we’ll end up in hell and never reach heaven.

The Celtic Christian tradition, on the other hand, maintains that heaven is not in the future; it’s here and now, all around us, woven into every aspect of our daily lives but obscured from view as if by a thick curtain. The Celtic tradition takes Jesus at his word when the Pharisees asked him when the kingdom of God would come and he answered, “the kingdom of God is in your midst” (Luke 17:20-21). It believes Jesus when he said the kingdom of God is spread upon the earth and people don’t see it (Gosp. Thomas 113).

Occasionally the thick curtain between earth and heaven gets thin. It may happen at a religious site like the Grand Mosque of Mecca, the Temple Mount in Jerusalem, or Lourdes, France. Or thin places may be found at more ancient sacred sites: Machu Pichu; Glastonbury Tor; Mount Sinai; Stonehenge; Ayres Rock in Australia; the Black Hills of South Dakota. Or the Mount of Transfiguration.

I first encountered a thin place at a Boy Scout camp where I climbed a mountain with my troop to build a cairn, in which I placed a rock painted with my name. The cairn and my painted name disappeared long ago, but the memory is fresh of how I looked over a forested valley and was drawn through the curtain into another dimension of existence.

There’ve been other thin places for me: a limestone promontory overlooking the Mississippi River, an old hilltop cemetery, a Trappist monastery, a confusion of highways near Newark, New Jersey. There were some that were not geographical places but experiences of relationship: a Methodist congregation in Carbondale, Illinois, an autumn afternoon conversation with a friend, a ten-day retreat in California with twenty-two strangers who became companions in a spiritual journey.

As different as those places are, they have this in common: first, though I’ve revisited some of those thin places, I’ve never been able to see again through the curtain there; and second, though the curtain remains closed, the memories remain fresh and powerful, like crimson glitter on the floor in my study, keeping those places and experiences fresh and holy.

There’s no way I can tell you what happened to Jesus or to his disciples that day on the mountain. But whatever allowed the disciples to behold the divine glory hidden in Jesus will continue, from time to time, to make the curtain between earth and heaven thin. And glimpses of the holy will be offered to us to sparkle through the rest of our lives.

← Waiting for God
An everlasting covenant →