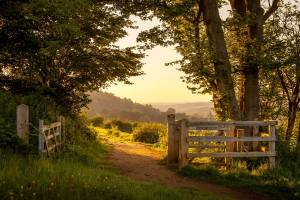 I was a lover of Rilke long before I discovered him in my summer years. Now well into autumn, he’s a staple of my literary diet. The satchel of books I would carry with me to the end surely includes his Book of Hours: Love Poems to God (specifically the translation by Barrows and Macy). When I read lines like these – “Somewhere there must be storehouses / where all these [unlived] lives are laid away. . . . / Maybe all paths lead there, / to the repository of unlived things” – I can hardly read further, I want so much to stop and ponder them.

Another of those essential books might be a collection of poems by Stanley Kunitz, who has spoken to me in much the same way, as in his poem “The Layers.” It begins,

I have walked through many lives,
some of them my own,
and I am not who I was,
though some principle of being
abides, from which I struggle
not to stray.

Some discoveries can be made only well into the journey. In a field by the road there is treasure which I would trade everything I own to acquire, and it’s only near the end of the long road that I’ve accrued enough to barter for it.

Rilke and his Letters to a Young Poet came to me at the right time in my summer years, just as I was beginning to learn to write the truth I hadn’t yet come to know, but I couldn’t have begun to appreciate the depth of his fullness until this far into the journey. And now Kunitz comes into view, whom I had read but hadn’t known before, inviting me into the next season as into an adventure to be relished.

Though I lack the art
to decipher it,
no doubt the next chapter
in my book of transformations
is already written.

Some things are worth waiting for.

← Love lives again
In the breaking of bread →